Through a Land of Extremes/centraal azie 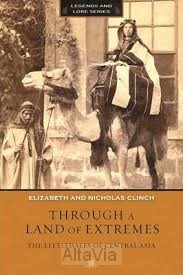 For thirty years, St. George Littledale and his wife Teresa mounted expeditions in North America and Asia - they were an unlikely British couple who explored Central Asia in the 1890s with their fox terrier. Through a Land of Extremes gives a taste for a bygone time of travel into uncharted, unknown territory, when adventurers lived by a combination of wit, charm, and luck. Of independent means, the Littledales began in the American Rockies, Yellowstone, and Alaska. These trips were followed by expeditions in the late 1880s in the Caucasus, the Pamirs, Russian Central Asia, and Mongolia. Their greatest exploit was a 14-month journey to Tibet in 1895. They were attempting to reach the Forbidden City of Lhasa, the great unmet goal of Central Asian explorers. In order to minimise their chances of being discovered, St. George selected a route across the desolate, uninhabited Tibetan Plateau. At a 19,000-foot pass, they were finally blocked by 150 armed Tibetans. The Tibetans allowed them to continue over the pass to a suitable stopping place. The Littledales had come within 49 miles of Lhasa, closer than any other foreigners since 1846. St.
George Littledale received the Patron's Medal from the Royal Geographical Society but Teresa was overlooked. They were very well known in their time for their extensive travels and exceptional adventures but have been almost completely forgotten - this is the first book about their fascinating story.